Grand Rapids ranked No. 1 in U.S. for job growth 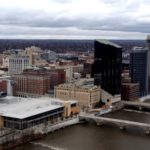 The Grand Rapids metropolitan area was the fastest growing economy in the U.S. last year, according to Headlight Data, a company that tracks economic and workforce development.

Grand Rapids’ workforce grew 4.4 percent last year, according to Headlight, which used U.S. Bureau of Labor Statistics to reach its conclusions. Total employment in the four-county region grew from 516,394 in 2015 to 539,152 in 2016, Headlight said.

More recently, the workforce for the region stood at 575,600, according to state figures released on June 22. Unemployment in West Michigan stood at 2.8 percent in May, slightly up from April, when the jobless rate stood at 2.4 percent.

Four large metros experienced shrinking economies. The greatest employment drop was found in Oklahoma City with a -0.8 percent decline. Houston was down .03 percent; New Orleans was down 0.2 percent and Pittsburgh was down 0.1 percent.

This article was published on MLive.com  http://www.mlive.com/business/west-michigan/index.ssf/2017/07/grand_rapids_ranked_no_1_in_us.html